There is no such thing as Public Anything 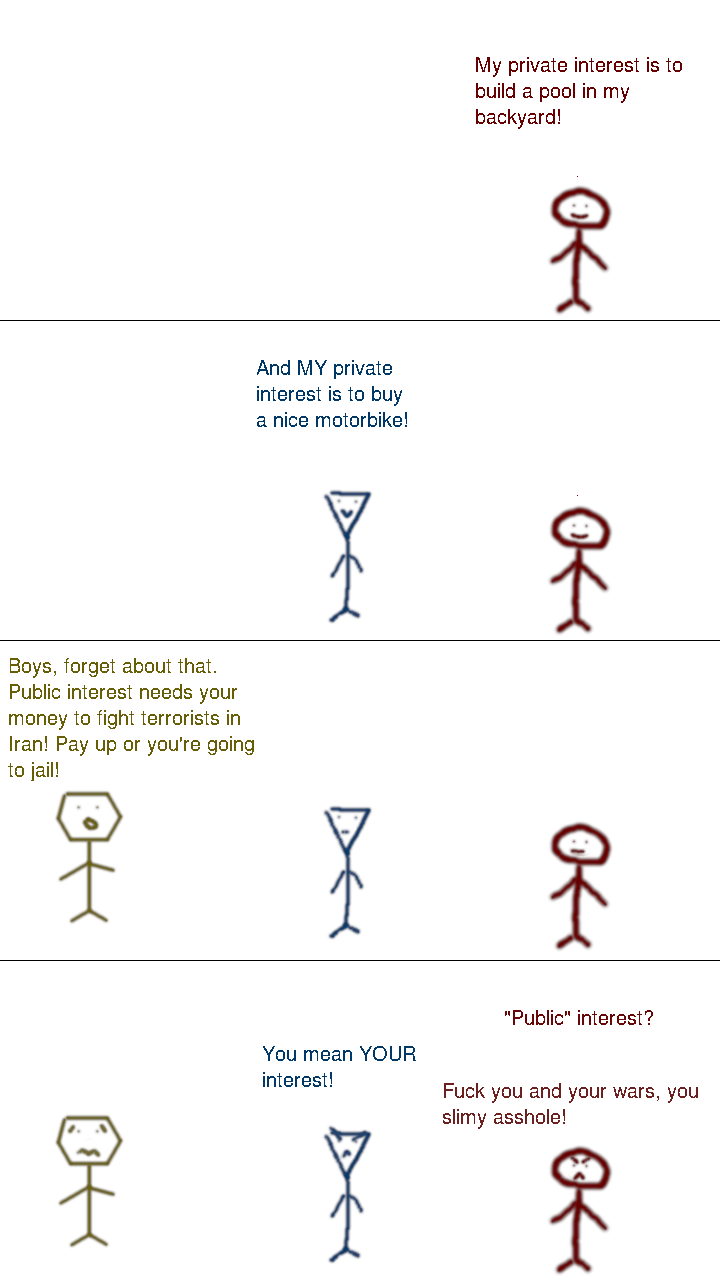 Modern nation-states justify their activities by claiming that what they're doing is in the """public interest""".

The reader will pardon the excess of double quotes, but there is just something about the word "public" which I've never been able to grasp.

I mean: what even is public?

Sure, if you're a pianist playing in front of other people, those people are your public (i.e. they're your audience).

But obviously, that's not the meaning of "public" that we're talking about, here.

The problem with governments is that it is not clear who their "public" really is.

And that's when the problems start.

Who the fuck is "everyone"?

Now, statists may claim that yes, public interest refers to the interests of everyone, but not literally everyone.

Good. But then, if not everyone, whose interests are included in the word "public"? The majority? But then why not call it "major interest" instead of "public interest"?

Besides, there is a problem even with the idea of basing a policy on the interests of a majority: interests fluctuate over time.

By the time a government is actually building a road "in the interests of the majority", the majority may already have changed idea. In fact, I would be surprised if they didn't. Just observe how many conflicting thoughts you yourself have over the course of a single day. Or read Joyce's Ulysses, which will show you exactly that.

Let's focus on another usage of the word "public" by governments worldwide: "public property."

Let's make an example. Instead of using roads, let's use something different: car sharing.

Suppose there is a government agency which lets people use a pool of cars. Those cars are considered "public property". But how can something even be considered property of the "public"?

Consider this: you go to this agency with the intention of using a car. There is only one car left, and there is another man there who also wants to use that car. How do you resolve such a situation? You can't obviously claim that the car is yours, because otherwise the other guy could claim the same as well.

The car may indeed be "public property"...

...but to whom does it belong, ultimately?

Obviously, to no one. If someone could claim ownership over the car, it wouldn't be public property in the first place!

The only entity which can be said to "own" the car is the government. But the government is an abstract idea: ideas can't own anything. Only people in flesh and bone can own property. But government is not comprised of a single person (unless we're talking about things like absolute monarchy, obviously). Clearly, not every individual who's part of the government can claim ownership over public property, because we've just established that if two or more people "own" the same thing, they don't really own it. In an absolute monarchy, sure: all "public" property is in reality property of the king. But in a state like, say, the USA, who owns the roads? Donald Trump? That's ridiculous, right? Imagine the outcry if Trump would announce that he's going to sell some roads as if they were his own property.

It may seem that we've reached an impasse: we can't determine who ultimately owns public property.

From this new point of view, what is then public property? Simple: what people call "public property" is nothing more that the PRIVATE property of the PRIVATE individuals who're so rich and so powerful that they're able to present their own PRIVATE interests as """public""" interests.

Let's look at some of the implications of this line of thinking.

Now, what is the main argument raised by statists against libertarians, anarcho-capitalists and anyone who can't stand governments?

B-B-But if you let private entities build roads, they can deny you access to them on a whim or they can keep rising the toll endlessly!!!

First of all, governments too can deny you access to """public""" roads, and there's nothing you can do if that happens: if there's a police roadbloack, try and see if you can break through it by claiming that "roads are public property".

Second, governments too keep rising the toll for utilizing roads. They're called TAXES, maybe you've heard of them.

This highlights a very important point. I'll write it in blockquotes since it's so important.

The above is exactly what happened in the Europian Union a few years ago.

THERE IS NO SUCH THING AS PUBLIC ANYTHING!

PUBLIC INTEREST IS NOTHING BUT PRIVATE INTEREST NOT RECOGNIZED AS SUCH!

PUBLIC PROPERTY IS NOTHING BUT PRIVATE PROPERTY NOT RECOGNIZED AS SUCH!